(April 21, 2013, Aftenbladet – Google translation) – Around 300 Ethiopian’s stopped the meeting in stavanger Norway for fundraising for Abay dam which is called by representatives from the Ethiopian Embassy in Stockholm Abay Mebrat Beyene. 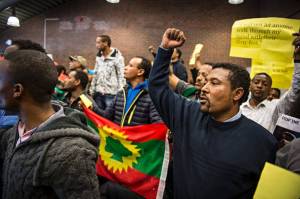 The police feared that it would get completely out of control when people in the audience went to the hard verbal confrontation against two representatives from the Ethiopian Embassy in Stockholm who had called for and chaired the meeting.

The police gave the first message that all protesters to leave the meeting while the two embassy people and their potential supporters can be seated. This denied the attendees protesters, and several feared it would come to an open confrontation between police and people in the audience. Then, specific efforts manager Øyvind Sveinsvoll of Rogaland police to stop the meeting and clear the room.

It was a wise decision, said several of those present protesters. They did not want the two embassy people should be left as “victors” while they were evicted.
The atmosphere was tense that the police chose to isolate the two embassy people from the rest of the participants. They escorted them out to a private car that carried them away from the area. The 300 attendees were then drop out of the courtroom.
There was general consul at the Ethiopian Embassy, ​​Abay Mebrat Beyene, who would chair the meeting with embassy secretary. The main theme was collecting money in the Ethiopian exile to a very controversial oppdemningsprosjekt – a prestige project for the regime in Ethiopia. 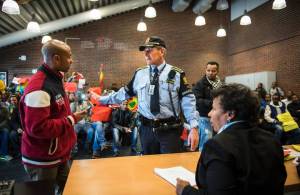 The Ethiopian authorities have tried to keep similar “recovery meetings” both in South Africa, Saudi Arabia, the U.S. and Germany, and each time meetings have ended in massive demonstrations against human rights violations in Ethiopia. People imprisoned without trial, free elections are abolished, freedom of speech likewise, newspapers are state controlled and hundreds of journalists imprisoned.

Several took the floor during the meeting the key bydelshus and said this was not a voluntary fundraising. Those who did not pay the money, you could expect problems when they contacted the embassy to obtain a passport or ID papers.

Saturday’s meeting was the first of its kind in Norway. And exiled Ethiopians came in separate buses from Oslo, others came from Steinkjær, Otta, Stord and Bergen other part of Norway to demonstrate in Tasta bydelshus stavanger against the regime in Ethiopia.

28. April, the Ethiopian Embassy in Stockholm hold a similar meeting in Oslo.