When it came to realising her dream of preserving the once-banned East African language Oromo, Toltu Tufa didn’t need to look any further than her dad, Abdu Tufa, for inspiration.

NOBLE Park’s Toltu Tufa had a dream to write a children’s book in her father’s native African language of Oromo, which was banned in parts of East Africa until 1991. 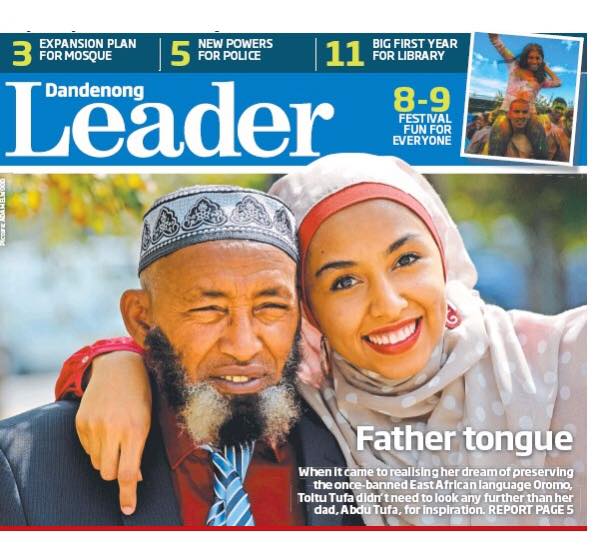 Her initial goal was to raise $ 50,000 through a crowd- funding campaign, but thanks to overwhelming support to save the African language, she ended up raising $124,000.

Now her dream has come to fruition and she has launched a range of educational tools in Oromo, including four textbooks, picture storybooks for preschool children, stickers and flashcards.

Earlier this month she returned to Australia after a book tour of seven cities in seven weeks, visiting communities around the globe who donated largely to her campaign.

Her books have sold out in each of those seven cities and yesterday, at the Melbourne launch of her Oromo range at Springvale Town Hall, Ms Tufa presented awards to those who helped to make her dream a reality.

“There’s so many local people in the city of Greater Dandenong who’ve actually experienced what it feels like to not have their language being spoken,” she said.

“There’s a lot of people who have suffered during the regime who want to pass ( Oromo) on to their children.

“Then there’s a lot of children who are just excited about having something that’s high-quality, colourful and available.”

Ms Tufa said she planned to make cartoons and videogaming in Oromo.

“The whole theory of my work is culturally empowered storytelling,” Ms Tufa said.

“I wanted children to be able to learn about their language in a context they understand, so they have cartoons that look like them and sound like them.”