However, charges include, but not limited to, alleged membership of the banned Oromo Liberation Front (OLF), public incitement, encouraging violence, as well as causing the death of innocent civilians and property destructions in cities such as Ambo and Adama, 120km west and 100km east of Addis Abeba during the recent Oromo protests in Ethiopia.

As per the decision during the last hearing, defendants were expected to appear at the Arada First Instance Court this afternoon, but were instead taken to the Federal High Court 19th criminal bench this morning. The court adjourned the next hearing until Tuesday April 26th.

The defendants that include a Kenyan citizen were all arrested between November and December 2015, shortly after the start (and in connection with) Oromo protests in November that gripped the nation for the next five months. Defendants also include several members of OFC, students and civil servants who came from various parts of the Oromia regional state. Except for the one Kenyan, whose name Addis Standard couldn’t obtain as of yet, all of the defendants came from Addis Abeba and various cities and towns within the Oromia regional state, the largest of the nine regional states in Ethiopia.

Although Bekele Gerba et.al were represented by lawyer Wondmu Ebbissa during the last five court appearances that took place at the Arada First Instance Court, today’s hearing in which the charges were read to the defendants happened with neither Wondmu nor any public defendant present, the reason why the court adjourned the next appearance until Tuesday April 26th. The next hearing is also scheduled to help six of the 22 defendants who spoke only in Afaan Oromo to come up with interpreters.

The court also ordered the police to relocate defendants from the notorious Ma’ekelawi detention center to prison facilities under the Addis Abeba Prison Authority. During the last hearing on March 18th, Bekele Gerba made an emotional appeal to the court revealing he and the 21 others with him were kept inhumanly in a cell the size of 4 X 5m that included a toilet and beds for all. “To be imprisoned is nothing new”, Bekele was quoted by his lawyer as telling the court, “but there is almost no country in the world which violates your basic rights while one is under police custody. I have never seen a government as cruel as the government in Ethiopia.”

In January Bekele Gerba et al went on a hunger strike protesting against inhuman treatments in the hands of the police including denial of family visits at Ma’ekelawi. Sever tortures against the defendants were reported in the same month.

Bekele Gerba, who is the fourth defendant (and a high profile defendant of all), was arrested on Dec. 23 2015.  His arrest is the second time since 2011, during which he was sentenced to eight years in prison suspected of allegedly belonging to the banned Oromo Liberation Front (OLF). He spent almost four of the eight years before he was freed in April 2015. In a May 2015 interview with Addis Standard, Bekele Gerba, known for his outspoken criticism of widespread injustices in Ethiopia, said prison was “not a place one appreciates to be. But I think it is also the other way of life as an Ethiopian; unfortunately it has  become the fate of many of our people.”

According to Sudan Tribune, however, a massive and coordinated attack has left at least 221 people dead on both sides.

The deadly attack occurred on Friday morning when heavily armed thousands of men, most of them reportedly in South Sudan’s military uniform, crossed into Ethiopia and simultaneously attacked about 10 different villages inhabited by the Nuer ethnic group in Ethiopia.

The attacked villages are inhabited by the Gaajaak-Nuer sections who are Ethiopian citizens.

At least 170 members of the Nuer ethnic group, mainly women and children, are feared killed, many others wounded and some children abducted.

At least 51 members of the Murle were also counted lying dead on the ground from the different villages.

Eyewitnesses told Sudan Tribune that the dead were identified to be members of the Murle community.

“They are from Murle community. Their dead have been identified. They have killed a lot of people, about 170 now confirmed dead. Majority of the dead are women and children. They have also abducted a number of children. It was difficult to resist them because our populations have no guns. The Murle came heavily armed, some with RPGs and in military uniform of South Sudan,” said Chuol Gach, one of the survivors who witnessed the attacks.

“They attacked about 10 villages in Jekow and Nyinenyang woredas [counties],” he said.

Other sources also told Sudan Tribune that at least 51 members of the Murle attackers were killed, 16 in the early morning of the fighting and 35 others were later killed in the afternoon when they were trying to retreat with over 600 heads of cattle and fell into ambush from the Cie-Nyajaani sub-section.

Most of the heads of cattle were recovered, he said, and the attackers have been pursued back into South Sudan’s territory.

Gach blamed the authorities of Gambella regional government for not responding quickly with security forces to rescue the “unarmed civilians.”

It was not the first time for the Murle armed men to carry out such attacks across the Ethiopian border. But eyewitnesses said the Friday attack was the first of its kind in decades due to the huge number of Murle forces involved and the number of the villages affected, in addition to the death toll.

“This government is at least better than previous ones,” remarked a 74-year-old Eritrean man to me last month in the Ethiopian capital of Addis Ababa, his longtime residence.

As it turned out, his assessment of the relative superiority of the current Ethiopian administration was for good reason: two of his children had been killed by a previous ruling outfit, the Derg military junta that took power in 1974 and began eliminating suspected opponents in droves.

Although that particularly bloody epoch came to an end in 1991, many a resident of Ethiopia might nowadays still have cause to complain about homicidal activity by the state. 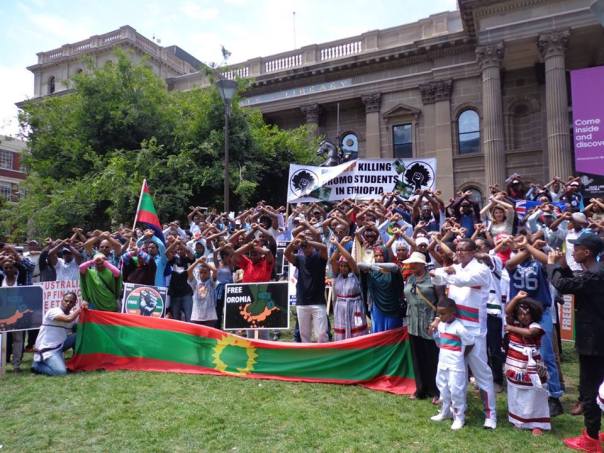 Members of the Oromo community in Melbourne protest against the Ethiopian regime, January 3. Photos: Ali Bakhtiarvandi.

In the Oromia region surrounding Addis Ababa, for example, there are claims that more than 200 people have been killed by Ethiopian security forces since November 2015, when protests broke out in response to the government’s so-called “Master Plan” to expand the boundaries of the capital by a factor of 20.

As a Newsweek article explains, the Oromo inhabitants of the region viewed the plan as “an attempted land grab that could result in the forced eviction of Oromo farmers and the loss of valuable arable land in a country regularly plagued by drought.”

This was no doubt a valid concern given the government’s established tradition of wantonly displacing Ethiopians in the interest of “development” — that handy euphemism for removing human obstacles to the whims of international and domestic investment capital.

Apparently, torture has also been a difficult habit for security forces to break.

Comprising some 35% of the population, the Oromo are Ethiopia’s largest ethnic group and have regularly decried discrimination by the ruling coalition party, the Ethiopian People’s Revolutionary Democratic Front (EPRDF), which is dominated by ethnic Tigrayan interests.

Politically motivated detention, incarceration, and other abuses have long characterised the landscape in Oromia, and the current protests have seen children as young as eight arrested.

And while the government has opted to shelve the Master Plan for now, protests in Oromia have continued. When I recently visited the town of Woliso, one of many protest sites in the region, residents pointed out that cancelling the plan wouldn’t bring back the dead people.

Events in Oromia have been described as the worst civil unrest in a decade.
Even without the Master Plan, meanwhile, the government is doing a decent job of courting investors. As I travelled west from Addis Ababa toward Woliso – a journey of about two hours — I passed sprawling factory complexes, including one featuring a Turkish flag flying alongside its more indigenous counterparts.

Launched in 2010 with a price tag of US$140 million, the Turkish-owned Ayka Addis factory is said to occupy several hundred thousand square meters of land.

The website of the Ethiopian Investment Commission furthermore lists Ayka Addis as one of “a number of private Industrial Zones” in Ethiopia, described as “success stories.”

Indeed, the EPRDF can point to double-digit economic growth over recent years to justify plowing ahead with its development model. But there’s more to life than GDP – as sizable poverty-stricken sectors of the Ethiopian population can presumably confirm.

About 200,000 people were reportedly in danger of trachoma-induced blindness in Oromia alone.

We might also take a look at the estimated 10.2 million Ethiopians currently “in need of urgent food assistance” — as reported, perhaps ironically, in a March edition of the English-language Ethiopian newspaper Capital, “the paper that promotes free enterprise.”

Additional troublesome statistics are contained in a 2014 BBC dispatch titled “The village where half the people are at risk of blindness.” The village in question is Kuyu, located in the Oromia region; the risk is due to infectious trachoma, “the world’s leading cause of preventable blindness.”

In the end, a lot of people in Oromia and beyond might have greater priorities than, say, income tax immunity for international developers.