His Oromo name was Magarsa Badhasa (1892-1936); but well known by the name Abuna Petros. He  was an Ethiopian bishop and martyr, executed on 29 July 1936 by the Italian occupation forces in Ethiopia for publicly condemning colonialism, invasion and massacre.

Abune Petros was born in Fitche, north of Addis Ababa, under the name HayleMariam but other suggest Magarsa Badhasa. One certain thing about Abune Petros ethnic background is like major Ethiopian figures like Abebe Bekela, Abebe Aregay, Haile Selassie, Tsegay/Gebremedhin his ethnic background is composed of Amhara and Oromo.He grew up in a peasant family. He decided to follow religious studies and at the age of 24 years, he became a monk. Later, he taught in the monasteries in Fitche. In 1918, he was appointed by the Ethiopian Orthodox Church as preacher and priest at the church of the monastery, Debre Menkrat located at Welayta. In 1924 he was appointed as a professor at the monastery church of Mary, on an island in Lake Zeway, southern Ethiopia. His sermons were known and appreciated by the local population. He spent a lot of time in monasteries around the city of Dessie and the region of Wereilu. He was also well known for his teaching and preaching to the people around the region to seek first the kingdom of God. One of his preaching was Colossians 3:12 “Therefore, as God’s chosen people, holy and dearly loved, clothe yourselves with compassion, kindness, humility, gentleness and patience.”. His sermons and preaching was very popular and insightful to the people in the area and the Monastery. In 1928 at St. Marks Monastery, Alexandria, he was nominated to be one of the four bishops for Ethiopia and given the title and name Abune Petros. He then was assigned as the bishop of the central and eastern part of Ethiopia, where he continued to preach the gospel. Abune Petros was used to fasting and praying a lot.

In 1935, Italian troops invaded Ethiopia. Aboune Petros went with Emperor Haile Selassie I at the northern war front where he assisted the wounded. He attended the violence used by the fascists in particular against civilians. Following the Italian victory at the Battle of Maychew, Ethiopian Patriots fold to areas in the south and Abune Petros went to the Monastery of Debre Libanos.
He used to question the ongoing war as, how Italy, a Christian country, would occupy in such a brutal manner another Christian peaceful country, Ethiopia? While some priests of Addis Ababa accept the presence of fascists, Aboune Petros denounced the killings of Ethiopians by Italian soldiers.
Aware of his popularity, the Italians, with the help of priests, sent letters to him to the change of camp by offering a peaceful life in a sumptuous residence in the capital. Aboune Petros hastened to refuse. 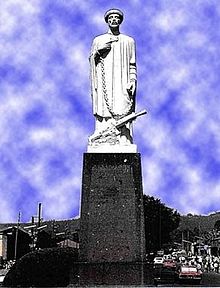 With the opportunities he had, Abune Petros preached both Ethiopians and Italian soldiers the words of God, peace, love and freedom. Italian authorities were convinced of the fact that they must have a peaceful rather than violent agreement with the Abune. In July 1936, he preached in public against crime, invasion and massacre being committed by the Italian forces. Italian soldiers were then ordered to arrest Aboune Petros. Before trial, the authorities gave him a final offer: if he ceases to denounce the Italian invasion and if he agrees to publicly condemn Ethiopian Patriots, he will be released. He refused and said:

“The tears of my countrymen caused by your gas and your machines will never allow my conscience to accept your ultimatum. How could I stand before God if I do not condemn a crime of such magnitude?”.

After a quick trial, Aboune Petros was sentenced to death. The news spread rapidly in the country and Ethiopians gathered in Addis Ababa to greet him one last time. The fascist fearing rebellion and an attempt to release him, decided to move as forward as possible the date of his execution. On 29 July 1936, he was taken to a public square, where a large crowd gathered. During his last speech, he said:

“My countrymen, do not believe the fascists telling you that the Patriots are bandits, the Patriots are people who are fighting to free us from the terror of fascism. Bandits are the soldiers who are in front of me and you, who have come from far, terrorize and violently occupy a weak and peaceful country: our Ethiopia. God gives to the people of Ethiopia the strength to resist and never bow to the Fascist army and its violence. An Ethiopian land can never accept the orders of the invading army. Land of Ethiopia; I condemn you if you accept such an invasion.”.

Shortly after, Abuna Petros was made to sit on a chair and shot with bullets by many Italian soldiers. He then became a national martyr in Ethiopia. Following this, many Ethiopians joined patriots and continued war with Italian soldiers for freedom, which was made possible by 5 May 1941.

Nowadays, Aboune Petros remains a famous Ethiopian history. A memorial statue is erected in 1946 near St. George’s Cathedral, Addis Ababa and the author Tsegaye Gebre-Medhin wrote a play on his last days. He now also is named as Saint Abune Petros by the Ethiopian Orthodox Church and a church is built by his name.