(Qeerroo, 29 April 2012) – Student Jirenya Ragassa was one of the peaceful demonstrators who were convinced to speak out against injustice and to work for democracy and rule of law, in a country where unspeakable mess is going on by an organized gang and self appointed “Government of Ethiopia”.

It is a conviction of tyrants that crushing dissents is the only way to move forwards. They don’t have the courage to face the bitter truth and brave hearts of their own citizens. By so doing, they exacerbate the already complex and unbearable situation and push the matter further to the brink. By killing one, they will help the birth of thousands and millions of Jirenya, who are ready to fight to the end for the right and dignity of their people and their land.

That is exactly what is happening right at the hero memorial held for Jirenya in different part of Wollega. They have vowed to keep their promise to each other and to the soul of Jirenya, that his sacrifice will inspire their life and their struggle until they achieve their goal. Students and fellow Oromo’s in Haroo, Limmuu, Diggaa, Saasiggaa, Eebantuu, Kiiramuu, Dhukkee, Dongoroo, Amuruu, Jaartee and other places have held a candle light ceremony in his remembrance, chanting and vowing to keep the cause going.

Jirenya has lived an exemplary life and had paid the biggest sacrifice for the cause of his people. He preferred to die on his feet than to live on his knees, leaving the rest of the job behind for us.

Let’s move the barrier, let’s make the monster in 4 kilo and his brutality only a matter history. Let us act NOW!!!

Injustice Somewhere Will Follow You Somewhere Else, in Oslo, Norway

(Oromo Press, 29 April 2013) A historically pro-Oromo refugees Norway has been evolving into an unfavorable place for Oromo refugees and refugees from the Horn of Africa in recent years. 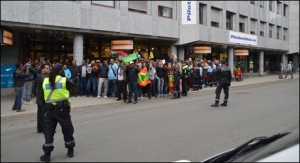 Abandoning its own humanitarian streak, the Norwegian government has drifted too far in the direction of questionable tolerance and support for the regime in Finfinne (Addis Ababa), which stands accused of war crimes and crimes against humanity in regions such as Oromia, Ogaden and Gambella, among other places. “Genocide Watch considers Ethiopia to have already reached Stage 7 [of genocide], genocidal massacres, against many of its peoples, including the Anuak, Ogadeni, Oromo, and Omo tribes.” 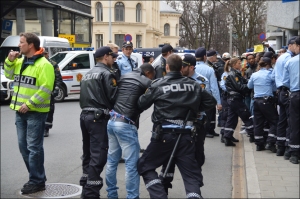 According to a news article by Johansen , of 150 Oromos who have showed up to stage protest in front of a hotel in Oslo, police arrested 11 under the pretext of causing a “public nuisance.” They were allegedly protesting without permission, which justified the arrest.

Unfortunately, for the Oromo, who gathered to protest the meeting of Ethiopian officials,  injustice in Oromia followed them in Oslo, Norway.  Oslo police clearly demonstrated that it cared more about the proceeding of the meeting organized by Ethiopian officials more than it cared about burning human rights issues that were to be raised by  the protesters: “It [Ethiopia meeting]does not go peacefully. We must try to keep them away from the hotel entrance, said operations manager of the Oslo police…” 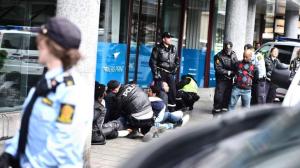 The arrest of the protesters against Ethiopian regime officials is not only unusual in highly developed nations like Norway, but it is also a worrisome situation as this might set off not only restrictions on freedom of speech,  but also the potential for deporting refugees just like  Yemen and other Horn of African regimes neighboring Ethiopia have been doing over the years in collaboration with Ethiopian authorities.

It would have been fair if instead of  arresting and handcuffing Oromo exiles with legitimate grievances, Oslo police arrested Tigrean People’s Liberation Front officials who work for a regime known for  committing mass atrocities and crimes against humanity in Oromia and Ogaden regions.  To put it in perspective, not arresting Ethiopian officials was almost like not arresting Omar al-Bashir, but instead arresting Darfurian protesters in Oslo, hypothetically speaking.

This arrest was not all too bad despite the dehumanizing aspect of holding down protesters on concrete sidewalks and handcuffing them in public.  The protesters did manage to make their case of opposing the rampant human rights violations in Oromia. The good news was the Oslo protesters were released later in the day and got news coverage in a Norwegian media out of the unfortunate event.  That is a good trade-off, but arrest targeting human rights activists should not have happened on a Norwegian soil of all places in the first place.

Which can be Google-translated using a Chrome browser and means the following:

Oromia is a region in Ethiopia, with an estimated 27 [??] million people. Oromo have their own language [Afan Oromo], and [Oromo] is [are] the largest of the 80 different ethnic groups in Ethiopia. Yet they are largely sidelined politically.[emphasis added]

Well, “sidelined” is a gross understatement for a people going through stages of genocidal process. But, at least it suffices that the entrenched problems Oromos face in Ethiopia are acknowledged thanks to the courageous demonstrators who did something in order to highlight the plight of the Oromo people in the Ethiopian empire.

A broader question: Is this an isolated incident against protesters who failed to seek permission or is this a part of the ever growing Euro-centrism that is increasingly becoming hostile toward immigrants from Africa?

As you may recall, the Norwegian government backed the deportation of “Ethiopian” asylum-seekers sometime in 2012. Norway signed an agreement with the Ethiopian government in order to facilitate the deportation of around 400 allegedly undocumented refugees.  Luckily, that also failed to materialize thanks to the wide criticisms it attracted from  Horn of African activists.

We need to constructively engage the Norwegian government to revert to its earliest pro-refugees and pro-victims position. This can be done by emphasizing that the ones that deserve to be arrested are the ones that commit mass atrocities in Oromia, i.e. Ethiopian regime officials, not innocents who take to the streets to speak up against injustice. Leave Oromo exiles alone.

For the quoted material, translation from Norwegian to English was made using Google Translate. Since this was a software-based translation, the meanings in the translation may not  accurately reflect the original. 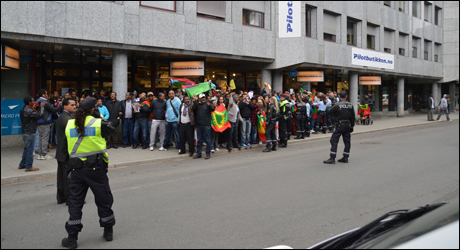 Police said the demonstration was illegal and eleven people were arrested for public nuisance. 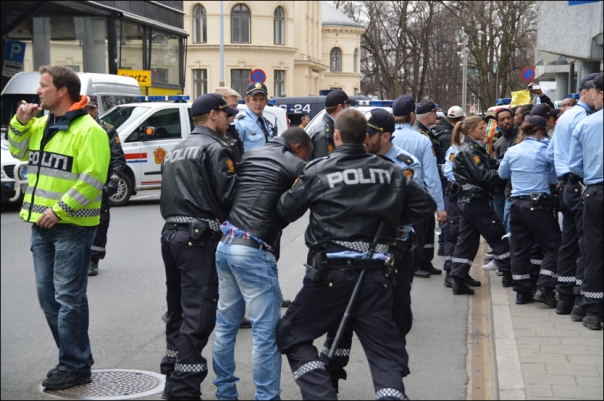 The protesters had first told to pull themselves away from the hotel across the street.

– They stood pressed against the doors of the hotel and we gave them permission to retire, I say.

The police came out with twelve police cars and dogs to keep track of the demonstrators.

Around 16 o’clock eleven people were arrested and demo station dissolved.