More than 60 dead as Oromo protesters and Ethiopian police clash

(#GrandMarch4Oromia, 8 August 2016) At least sixty people were killed during fresh clashes between police and anti-government protesters in more than 200 Oromia cities and towns since 6 August 2016.

Saturday’s grand rally was called by Oromo activists to express deep-seated mass grievances, country-wide anguish and suffering, widespread violation of rights that is perpetrated by the TPLF regime over the past several decades.

In the past 9 months alone, the Oromo people saw one of the bloodiest military response from the regime that murdered over 600 lives, shot and injured over 5000 persons, incarcerated tens of thousands and caused forced disappearances of thousands.

The regime has also rendered hundreds of thousands landless, jobless, homeless, and placeless. It has demolished houses of thousands who have been rendered homeless and left out in the punitively cruel cold weather of the rainy season. All this is mainly, although not merely, because of the people’s decision to protest the government’s Master Plan that illegally and unconstitutionally annexed their ancestral lands in and around the Capital Finfinnee/Addis Ababa.

This Grand Rally was staged in all the major cities and district towns of Oromia. This rally was a peaceful rally expressing the people’s general yearning for a just peace.

More than 100,000 people were participated on the ‪#‎GrandMrach4Oromia‬ in all major cities and district towns of Oromia. More than 1000 people gathered amid a heavy police presence on the capital’s main Meskel Square shouting slogans such as “we want our freedom” and “free our political prisoners.”

Police swiftly moved in to break up the protest.

“This is a mass movement of civil disobedience which is not organised by political parties,” Merera Gudina, chairperson of the Oromo People’s Congress group told AFP.

“People are totally fed up with this regime and expressing their anger everywhere”.

This story is from http://www.grandmarch4oromia.com/2016/08/08/more-than-60-dead-as-oromo-protesters-and-ethiopian-police-clash/

(Advocacy for Oromia, 7 August 2016) The Human Rights League of the Horn of Africa (HRLHA)* says the long Oromo nation’s protest against the TPLF/EPRDF- led dictatorial government,  which has been going on for the past  eight  months, expanded its scope  on August 6, 2016. 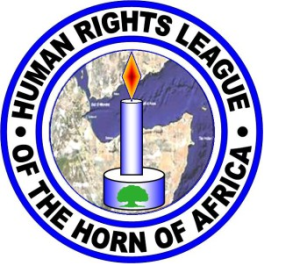 According to the Human Rights League of the Horn of Africa (HRLHA) press release over 190  Oromia cities and towns including the capital city of Addis Ababa participated in the grand rally of  Oromo nation to present grievances and  demand fundamental human rights.

In this region- wide August 6 protest , in which for the first time the residents of the capital city participated, over 70 Oromos were recklessly brutalized and beaten and  over 800-1000  Oromos were taken to prison according to the HRLHA informants  in Oromia Regional State.

During the eighth round of the protest on August 6, 2016  the most devastated zones of Oromia were Awaday and Haromaya in East Hararge,  Asasa in  West Arsi , Dodola and Robe in Bale,  Ambo  and Walso in  West Showa,and  Naqamte in East Walaga  among others.

Since the protest started in November 2015, the government of Ethiopia has mercilessly killed over 670 Oromos and detained over 50,000. Among the dead, the majority are university and high school students, young children, pregnant women, and seniors. The killing squad Agazi force killed people not only on the streets, but in their homes  during the night time by breaking down their doors. Many people were taken from their homes and arrested, then taken to police stations, military camps and concentration camps.

The Human Rights League of the Horn of Africa (HRLHA)  and other human rights organizations have widely reported on the protests in Oromia in order to  make the world community aware of the real scope of the protests.

However, the world communities have chosen to remain silent and a few government agencies have responded to the horrific human rights crisis in Oromia Regional State.

It was in such circumstances and with outcries from human rights organizations that Ethiopia was elected  on June 28, 2016[4] to a UN Security Council member  seat ” one of the six principal organs of the United Nations, responsible for the maintenance of International Peace”. The HRLHA expressed its disappointment at this election to the president of the UN General Assembly in its appeal on July 4, 2016 “ THE ETHIOPIAN GOVERNMENT SHOULD NOT BE REWARDED FOR MASSACRING ITS PEOPLE”[5]

From 2011 to the present, Ethiopia has been a member of the UN human rights council[6]with the responsibility of protecting and promoting human rights globally.

Backgrounds of the Oromo grievances:

Since the TPLF/EPRDF government came to power in 1991, several documents have been created, including the 1995 Constitution. These documents, however, are designed only for show, to make the government look good to foreign eyes. Here is the truth:

From day one when the TPLF/EPRDF assumed power, the Tigrigna People Liberation Front (TPLF) members have focused on diminishing the political capability of the nations and nationalities of Ethiopia, groups that the government regards as its political  opponents.

The TPLF, which represents only 5-6% of the total population of Ethiopia, monopolized political and economic power, ignoring the rights of the other 95% of the Ethiopian population.

The OPDO has no power, but serve as messengers and translators for the TPLF to penetrate into Oromia.

TPLF- owned companies such as  the Endowment Fund for the Rehabilitation of Tigrai (EFFORT)[7] and Mesfin Engineering took all opportunities to control businesses in Oromia and other regions. This made the TPLF members, including the military commanders,  millionaires while the area’s business community  members were left powerless

The resources of Oromo, Gambela and Benshangule people have been exploited not only by the TPLF members, but also by TPLF partner foreign government. For example,  for Hasen Guleid , the Djibouti president over 1000 hectares of Oromo land from Bale,Dodola has been granted for

Tens of thousands of  hectares of Oromo, Gambela and Benshangule lands have been leased to foreign investors at cheap prices without consent and consultations with the land owners.  Millions have been evicted from their livelihoods and became homeless, jobless and beggars.

*The HRLHA is a non-political organisation that attempts to challenge abuses of human rights of the people of various nations and nationalities in the Horn of Africa. It works to defend fundamental human rights, including freedoms of thought, expression, movement and association. It also works to raise the awareness of individuals about their own basic human rights and those of others. It encourages respect for laws and due process. It promotes the growth and development of free and vigorous civil societies.

(Financial Times) Scores of people were arrested in Ethiopia on Saturday in a wave of anti-government protests that rocked the capital Addis Ababa and dozens of other towns in the restless region of Oromia.

Images posted on social media showed huge demonstrations in the capital and other cities. Activists said the protests could mark a possible turning point in the nine month campaign against the government. 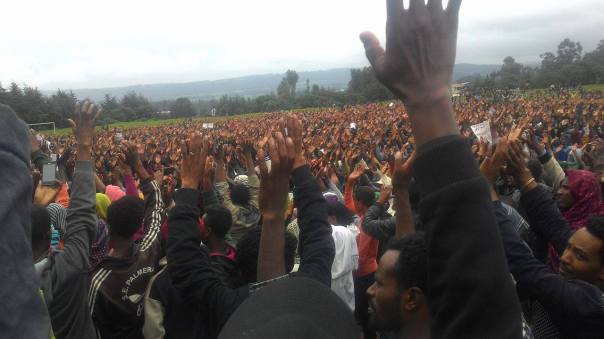 “The dynamic had shifted and people are now calling for the downfall of the government,” said Jawar Mohammed, who runs the Oromo Media Network in the US state of Minnesota and said he was in regular contact with protesters in multiple cities. “This is by far the biggest demonstration that Ethiopia has seen in terms of size and co-ordination across Oromia.”

Fisseha Tekle, an Amnesty International researcher who is based in Kenya, said the police and the army were using live bullets to disperse the protesters.

The demonstrations were sparked last November in protest against a move to extend the municipal boundaries of Addis Ababa into Oromia, which straddles much of the centre and south of the country and includes the capital. But they have grown in intensity in response to a fierce government crackdown.

The Oromo make up about 40 per cent of Ethiopia’s 90m people but they believe they are marginalised by the Tigrayan ethnic group, which dominates federal institutions despite comprising only about 6 per cent of the population.

In a report released in June, Human Rights Watch said that at least 400 people had been killed and thousands more injured since the protests began.

However, Ethiopia’s communications minister Getachew Reda said that Saturday’s protests were “illegal” and that “scores” of people had been arrested in the restless region.

Mr Getachew denied suggestions that security personnel had used live gunfire but said armed protesters were “trying to arm-twist the security forces into shooting” and “destroying private and public property.”

Independent efforts to reach protesters in Ethiopia were unsuccessful. The Ethiopian government has severely restricted access to the internet and social media in the Oromia region, making it hard to verify reports of protests.

But images showing bloodied bodies of protesters were circulated on social media using the hashtag #oromoprotests.

A mass demonstration was held in Gondar last Sunday, a city in the northern region of Amhara, to express solidarity with the Oromo and to express other grievances. It was the first time a major protest had broken out in another part of the country.