← 40 Percent of Eritrean Migrants in Europe are Ethiopians: Austrian Ambassador
Giving Thanks in Many Voices: Oromo Irreechaa →

“Terrorist” for being a ‘bachelor’!

BefeQadu Z.Hailu
Edited By:Endalk H. Chala
(A4O)Aduňa Kesso is a Qeerroo. According to Aduňa, Qeerroo in Afan Oromo means ‘a young; bachelor who  who does not have a child yet’. 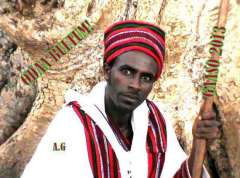 “You can’t help it I’m a Qeerroo”, he jokes comparing the fact that I’m 10 years older than him. He was a 2nd year Electrical Engineering student at Adama University when he was arrested in May 2014.

By then, I along with six of my colleagues from Zone9 and the three journalists were also in jail. During the heyday of university students protest. We were detained in Maekelawi, the country’s notorious pre-trial detention center and I have no idea of what was going on in the country. Maekelawi is not only a detention center but it also is a seclusion center. Twenty or so days into my 544 days of incarceration, we were joined by students from Oromia who were arrested due to their protest of the new master plan.
In Maekelawi our cells were located in its infamous part,inmates call those cells ‘Siberia’ because of their unbearable cold. The new inmates were added to our tiny cells. Total of 15 students were arrested (11 of them were released from Maekelawi in political intervention from the Oromia state; 6 students including two other students who were later detained and were charged of detonating a bomb at Haromaya University.Among them was Aduňa who became one of my inmates.
Read the whole story here: https://advocacy4oromia.org/witnesses/terrorist-for-being-a-bachelor/

Posted on November 18, 2015, in Uncategorized. Bookmark the permalink. Leave a comment.

← 40 Percent of Eritrean Migrants in Europe are Ethiopians: Austrian Ambassador
Giving Thanks in Many Voices: Oromo Irreechaa →