Today is Human Rights Day–Here’s What You Can Do

Today is International Human Rights Day, which marks the anniversary of the adoption of the Universal Declaration of Human Rights on December 10, 1948. Crafted in the shadow of the horrors of the Holocaust and World War II, the Declaration gave the world the vision it needed to stand up to fear and the blueprint it craved to build a safer and more just world. 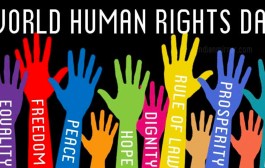 It is a bold document, based on a single premise – that the “recognition of the inherent dignity and of the equal and inalienable rights of all members of the human family is the foundation of freedom, justice and peace in the world.” Eleanor Roosevelt, who led the drafting and adoption of the Declaration, understood that we are all members of the human family, and that for governments to prosper and wars to cease, we must treat each other with the same respect and candor that we treat our own families. She knew this would not be easy or popular and that she would be accused of championing ideals that could never be achieved. But she persisted; knowing that without ideals, politics and policy are merely power games without a soul.

She urged America and the world to recognize that human rights “begin in small places, close to home…the places where every man, woman and child seeks equal justice, equal opportunity, equal dignity without discrimination.” And that “unless these rights have meaning there, they have little meaning anywhere.” But she also knew that rights come with responsibilities. For rights to exist here and around the world, we must recognize, implement, and defend them. As she often argued: “Without concerned citizen action to uphold them close to home, we shall look in vain for progress in the larger world.”

Eleanor Roosevelt dedicated her life to promoting this vision. Hillary Clinton dedicates her life to implementing it. It is not simple work. “Our challenge,” Hillary wrote in “Hard Choices,” “is to be clear eyed about the world as it is while never losing sight of the world as we want it to be.”

From the White House to the halls of the Senate and the State Department, Hillary strove to make these ideals a vibrant part of American domestic and foreign policy. Sometimes she did it with bold pronouncements on the world stage as she did in Beijing when she declared that “women’s rights are human rights, and human rights are women’s rights.”

Sometimes she did it by creating departments like the Global Office of Women’s Issues or elevating the State Department’s human rights office. Other times she did it in hundreds of quiet meetings with human rights activists and dozens of town hall meetings she held in communities from Argentina to Pakistan to South Korea. These conversations were not easy. Some leaders feared for their lives, others for their families, and others challenged Hillary to do more than she could possibly do. But she did not shy away from them. Indeed, she sought them out – even when she could do no more than lend the power of her position and her stature to their defense.

But three examples stand out.

In 2011, Ugandan thugs killed David Kato, a gay rights activist, and the Ugandan minister of ethics and integrity announced that “homosexuals can forget about human rights.” Rather than just mourn David and issue a formal rebuke, Hillary decided to confront, head on, the targeting of LGBT people sweeping Kenya, Nigeria, Uganda, Iran, and Russia.

She decided to return to Geneva, home of the United Nations Human Rights Council and thousands of global diplomats, on International Human Rights Day. Before an overflow audience, in remarks streamed live around the world, she confronted this outrageous behavior. LGBT people are part of the world’s family. “Like being a woman, like being a racial, religious, tribal, or ethnic minority, being LGBT does not make you less human. And that is why gay rights are human rights, and human rights are gay rights.”

In 2012, in the middle of our nation’s most intense economic negotiations with China, Hillary had an unexpected, stark choice to make. One of China’s most famous dissidents, the blind Chinese human rights activist Chen Guangcheng, had made a daring midnight escape from the guards surrounding his home, to seek sanctuary in the U.S. Mission. He did not know if he wanted to leave China and he had broken his foot during his flight. He called the Beijing Mission, which then called Hillary in the middle of the night. Hillary had worked hard to develop candid and productive relationships with the Chinese ministers so she knew how the Chinese would react and the damage the news of Chen’s escape could do to the summit. But she wanted to help Chen. She instructed embassy staff to find him, bring him in, and give him medical care. The Chinese were shocked, but Hillary kept them at the table, the summit continued, and Chen enrolled in a New York law school. His family came with him.

At home, America reels from the tragic deaths of Michael Brown and Eric Garner. A bitterly divided nation once again questions whether justice is possible and whether different races can pierce the divides that separate and stereotype them. As protests erupted across the nation, Hillary challenged us not to lose sight of our common humanity. “I know that a lot of hearts are breaking, and we are asking ourselves, ‘Aren’t these our sons? Aren’t these our brothers?’ The most important thing each of us can do is to try even harder to see the world through our neighbors’ eyes. To imagine what it is like to walk in their shoes, to share their pain and their hopes and their dreams. These tragedies did not happen in some far-away place. They didn’t happen to some other people. These are our streets, our children, our fellow Americans, and our grief. We are all in this together, we can all do better.”

We can do better. That’s what human rights mean.

Eleanor Roosevelt believed it and Hillary knows it. It is hard, tiring work. It takes the courage to dream, the political skills necessary to implement the dream, and a heart fierce enough to continue the struggle. On this day, let us recommit. Let us hear Hillary’s call. We must “never rest on [our] laurels. Never quit. Never stop working to make the world a better place. That’s our unfinished business.”

ALLIDA BLACK, Ph.D., is the chair of Ready for Hillary and an Eleanor Roosevelt historian. She is a research professor of history and international affairs at the George Washington University in Washington, D.C.

Today, The Advocates for Human Rights, along with Human Rights First, theInternational Oromo Youth Association, Oromia Support Group Australia, the Oromo Community of Minnesota, the Oromo Studies Association, and World Without Genocide at William Mitchell College of Law, sent a letter to six of the United Nations’ special procedure mandate-holders, urging them to request and conduct country visits to Ethiopia to investigate actions taken by the Ethiopian Government in response to student-led protests in the state of Oromia.

The request comes on the heels of last month’s Universal Periodic Review of Ethiopia at the United Nations Human Rights Council, where the Government of Ethiopia agreed to “grant full access to Special Rapporteurs and Special Procedures Mandate holders to visit the country, notably the Special Rapporteur on the Right to Education,” and to “accept the outstanding requests for visits from the special procedures” of the United Nations.

“Moreover,” the letter notes, “the situation is grave. The June 1 death of a student in custody suggests that demonstrators are being subject to torture and other forms of ill-treatment while in custody.”