After almost a decade of relative dormancy, Oromo students across universities in Oromia return to staging brazen rallies across Oromia and Ethiopia defying the presence of fully-armed EPRDF  troops and security forces.  The students are protesting the new Addis Ababa Master Plan, which aims to expand the landmass on which the city is sitting by unconstitutionally annexing tens of neighboring Oromia state’s cities and rural districts (Aanaalee) within a 140 kilometers range against the will of the Oromo people. Thousands of students participated in the ongoing anti-Addis Ababa Master Plan non-violent demonstrations from Jimma, Ambo, Haromaya and Wallaga  public universities.At the most recent rally at Wallaga University in western Oromia, Ethiopia’s army and police opened fire with live ammunition injuring unknown numbers of students and terrorizing others into fleeing the campus to hide in nearby forests, according to a report obtained from the April 26 broadcast of Oromo Voice Radio, in Afan Oromo. 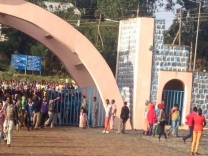 The National Youth Movement for Freedom and Democracy, Qeerroo, reported on its website that when the protest began on Jimma University campus on April 22, 2014, government soldiers and police responded with brutality– kidnapping, arresting and torturing over 12 students.
The students called for an end to the evictions of an estimated 8-10 million Oromo farmers in the vicinity of Finfinne (Addis Ababa) from their ancestral lands. Among other human rights, the Oromo students demanded Oromia’s rights to self-government and the right to decide on the fate of its resources, including land and minerals.Ambo University students alongside residents of the town of Ambo, in central Oromia,took to the streets in several hundreds and protested the master plan on April 25,2014.
The students marched chanting slogans such as “Oromia belongs to the Oromo people,”  and “Finfinne is the heart (center) of Oromia,” highlighting a long-standing Oromo yearning for self-government and freedom from colonial oppression.

Another contingent of Oromo student staged a similar rally at Haromaya University, eastern Oromia, emphasizing that the Oromo people are not going to “cut and give away” cities and rural districts of Oromia to  Abyssinian colonial powers in Addis Ababa. They demanded the release from prison  of Oromo singer Jafar Yusuf, who released a music video protesting the master plan, which became the cause for his imprisonment. They also demanded Afan Oromo, the Oromo language, be made a federal official language. Haromaya Univesity students demanded an end to killings, imprisonment and torture  targeting the Oromo people.

All the protests have had a common theme of demanding the Oromo right to self-government and ownership of its own country/land. Many of the slogans chanted by the students in all universities viewed Addis Ababa Master Plan as a callous plan by Ethiopia’s minority government to continue committing atrocity crimes [including genocide] against the Oromo people.

The master plan was secretly created by  the inner circle of the Tigire People’s Liberation Front, who announced the implementation of the plan in an imposing way early this April. The people of Oromia, who never participated  in the plan’s making, sternly objected to its implementation from day one across Oromia and the diaspora, and the opposition to it is gaining momentum by the day.

Addis Ababa city officials tried to make the unpopular plan to  look like a popular “development plan” by staging partisan and fake public discussions of the plan for non-Oromos in Addis Ababa who are not the victims of the planned new expansion, but who are the benefactors of the spoils of the city’s expansion currently and historically.

Posted on April 27, 2014, in Uncategorized. Bookmark the permalink. Leave a comment.