Dabessa and his wife Lelisse are members of the Oromo ethnic community in Ethiopia. The couple worked as journalists for a government-owned television station in Ethiopia until Dabessa was jailed in 2004 on suspicions that he supported the dissenting Oromo Liberation Front. After nine years of persecution, separation and uncertainty, their family was reunited in Australia in 2013.

Dabessa served three long years in prison. His only crime: his Oromo identity.

He says, “I passed through prison. It was a very challenging, very hard time. There were people who were killed in front of me. They killed anyone — I saw it with my own eyes. I never thought I would come out. [I thought] they would kill me.”

With Dabessa in jail and three young children to raise, Lelisse shouldered the burden of care. “It was hard for my wife during that time,” Dabessa recalls.

“At the same time every week, she visited me in prison, carrying two kids. Bringing some food and fruit, which is not available in prison. [Every] Saturday and Sunday for three years.”

When he was eventually freed, Dabessa feared his wife might also be at risk of false arrest: “If the Government suspect you, anybody can arrest you because there is no rule of law, no due process. They arrest you, put [you] in custody, and they say whatever they like.” After his release, Dabessa learnt that the Government was orchestrating a case to arrest him again, so he and Lelisse decided he should flee to Kenya.

While Dabessa was in Nairobi, applying for refugee status, his worst fears were confirmed: “I got the news my wife was arrested … The Government shut down the Oromo [media] desk.”

“[I was] very shocked,” Dabessa recalls. “I was for a moment thinking, ‘What can I do?’ The crying came later.”

The trauma of separation

Just like her husband, Lelisse was falsely imprisoned for three years. In that time, Dabessa arranged for their children to be brought to Nairobi, and the family made their way to Australia — without Lelisse — as refugees.

In Australia, Dabessa sought legal assistance and started raising money to support and free his wife. When Lelisse was finally freed, Dabessa wanted her to join the family in Australia immediately — but the process was not so straightforward. Dabessa says, “When you know all the evidence is there, there is no reason why it should take this long time. I’m not complaining or I’m not saying that the process is long, because when we compare with others, mine is very short … [but] during this period — physically, mentally — you are always thinking about the family you left back home.

“You are sending money. You are not productive here, you are focusing around your family … Basically, you are incomplete.”

“Obviously, she’s your wife, you’re separated — that emotionally affects you. You don’t have somebody who fulfills your life. You miss [her] and you don’t have anything to replace [her]. And psychologically you’re thinking about that person always, and that person is not with you for nine years. Emotionally, you think you can’t fight … It’s a lot.” 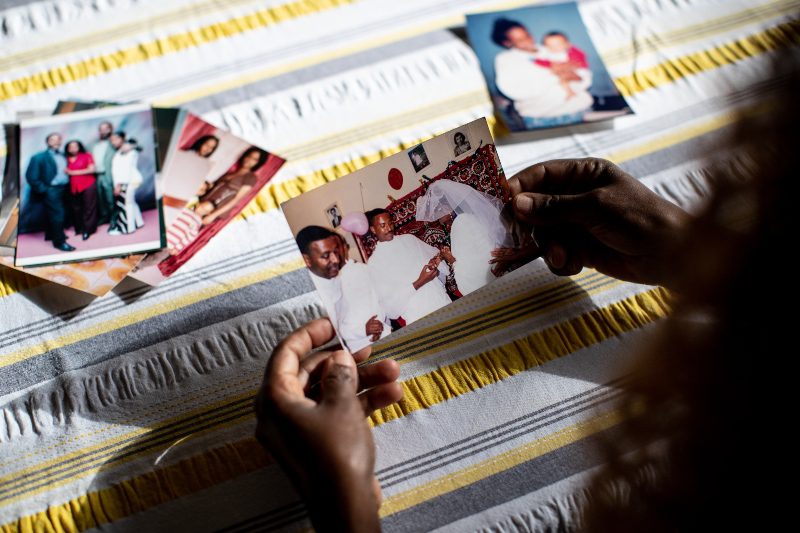 Melbourne, Australia: Lelisse, looks at an old photograph of herself with Dabessa on their wedding day. Photo: Kim Landy/Oxfam Australia

Lelisse struggled too. She says, “Being separated is not good for yourself or your children … It weighs on you heavily, especially for your mental health, it’s not good. It’s very isolating. Being away from your family is like being separated from within yourself — being torn apart.”

Dabessa was thankful for the safety and freedom his new home afforded him. But his continued separation from Lelisse made it hard to settle in or get ahead.

“Until Lelisse arrived, I never think about a job because I’m caring [for the] children,” he explains. “I need to be home when the children come home. I’m going shopping, cooking, and making them to be stronger.”

Without Lelisse, Dabessa became withdrawn and disconnected from his new community. He says, “You realise you are not contributing what is expected in your community and when you [know] that, you feel [it] inside. You realise you need to do something.”

Dabessa longed for the day that Lelisse could join him and the kids in Australia: “One day, the joy [will] come back. One day, we will start our new life.”

When Lelisse finally arrived in Australia in 2013, there were emotional scenes at the airport. Dabessa recalls, “We cry in happiness … because that was the day we dreamt of for a long time. For me, I cry for myself and my kids at the same time. It’s not easy. It’s like I lost part of my life, my body for a long time. It was a very tough time.” Melbourne, Australia: Dabessa (pictured right) and his wife Lelisse at their home in Melbourne. After a long period of separation and hardship, Lelisse was finally reunited with Dabessa and their children in Australia in 2013. Photos: Kim Landy/OxfamAUS.

At the airport, Lelisse felt relief and happiness when she saw her son Bonsen holding a sign that said “Thank you Australia for bringing my mum”.

Dabessa says, “We thank the Australian Government — even though it was delayed — for [us] being reunited, and making our life happy.”

The family has gone from strength to strength since they were reunited. Dabessa says, “We were not productive during the separation. Now, my wife is working, I’m studying — we support each other, kids are studying.”

“My kids are at a good stage. My first daughter, she [is] married. She’s graduated from nursing, she is working now. My second daughter is a university student, [studying] law and art now … and my son is studying also.” Having survived so many years of separation and hardship, Lelisse and Dabessa have developed an unshakable resilience. He says, “We are very positive, we work together, looking after our children and to contribute in positive ways to the nation who provided us kindness — and we wish this [kindness] is extended to others.”

“Family reunification is important — if the family support each other, they produce more. They contribute their energy, money, knowledge, and they’re doing right things.

“It’s important to support people who leave their country, and grant visa here to bring their family. The country loses nothing. They benefit because these people are experienced people, these people endured many kinds of injustice, and they survived … So most of them are strong people because of these experiences, so they produce more.”