(Advocacy4Oromia) With the eyes of the world upon him, Oromo marathoner Feyisa Lilesa used the stage of Sunday’s Olympic marathon to daringly protest his own government back home. 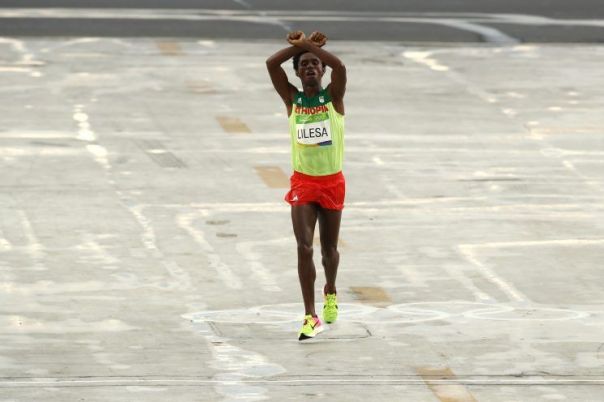 As he neared the finish line and a silver medal, Lilesa raised his arms to form an “X.” The gesture is a peaceful protest made by the Oromo people, the largest ethnic group in Ethiopia and one that is facing a brutal response to widespread protests that began late last year.

Human Rights Watch estimated in June that 400 people have been killed and thousands more injured as the government attempted to stop the estimated 500 protests that the Oromo people staged to draw attention to systemic persecution by the government.

Lilesa is from Oromia, which is home to a large majority of the country’s 35 million Oromo. He didn’t back down from the protest after the race either, flashing the sign for cameras at a press conference and pledging to do it again during Sunday night’s closing ceremony.

Rule 50 of the Olympic charter bans political displays or protests, and the American duo of Tommie Smith and John Carlos was famously suspended by the USOC after the pair flashed the black power salute on the medal stand at the 1968 Summer Games.

Lilesa, however, has bigger things to worry about than the IOC response as such dissent puts his life in real danger if he returns to Ethiopia. He told reporters afterward that he would seek a visa to stay in Brazil or possibly come to the United States. He also said that his wife and two children are still back in Ethiopia.

Posted on August 21, 2016, in Uncategorized. Bookmark the permalink. Leave a comment.