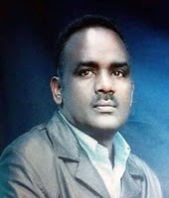 I met Ararso in June 2004 in Karchelle Prison in Finfinnee (Addis Ababa), Oromia (Ethiopia). By the time I met him in zone 3 of Finfinnee (Addis Ababa) Prison also known as Kerchelle, Ararso was already more than 10 years in prison but not sentenced. We were together on Karchelle for a year and then we, along with all other prisoners transferred to Kaliti Prison, we were together in Kaliti prison until March 2007, When I was released, Mr. Ismael told me a bit about his history.

He was an OLF (Oromo Liberation Front) leader in the Hararge region during 1991, when the OLF was a legitimate political party in Oromia (Ethiopia). When OLF was pushed out of the transitional government by the TPLF, he was arrested along with many others. They were taken to Hurso Military Camp in Hararge and detained there from 1992-1994. After that, he was transferred to Zeway Prison and remained there until 2000. In these 9 years, he was detained but was never taken to court and was not charged with any crime.

After Zeway, Ararso was transferred again to Karchelle Prison in Finfinnee (Addis Ababa) where I met him. While I was with Mr. Ismael in Karchelle, he and his batch were sentenced to death in the high court. As a law student, I have looked at their charge and realized that the allegation was only politically motivated and not supported by evidence. No evidence was presented at courts of laws, except written statements by prisoners who were tortured and promised release by police at police station. The wife of one of his batch called Muda fainted in the court room and died within a day after she heard the sentence. His movements were severely restricted. He was kept in a small room where he was highly supervised. His medical care was more restricted than other political prisoners.

After I was released from prison in 2007, I visited Ararso about every 3 months while I was attending university.

In about 2012, he was transferred to Qilinxoo Prison near Finfinnee . I left Ethiopia in July, 2013, so I lost contact with Mr. Ismael until we contacted each other by telephone in the spring of 2015. He told me that he was being constantly followed and was having a hard time resuming daily activities, especially around the time of the May Parliamentary election. He told me he and his wife had decided to flee to Kenya because their life was becoming unbearable in Ethiopia.

Now that Ararso and his wife are in neighboring country, they are still afraid because they know that the Ethiopian government also has spies in neighboring countries. Even though he escaped from the jaws of Ethiopian government, his case was so slow that he was appointed to May 2017 for interview. I have written a letter to UNHCR Kenya Representation to expedite his case to be resettled to a third country because Mr. Ismael is a high profile refugee due to his many years in prison and his previous involvement in the OLF during the transitional government in Ethiopia. His security should also be guaranteed as he is surely a prime target by Ethiopian government security officials.

The missing of prominent customary leader Dabbasaa Guyyoo make us worry about people like Ararso. I want to call up on all Oromo activists to make pressure on UNHCR and International Human Rights Organizations in general and UNHCR-Kenya in particular to pay due attention to Oromo asylum seekers.