← Jimma University hosts the First International Conference on Oromo Studies
Menelik II is the Least of my Worries: A Note to the Apologists of Empire →

THE PEOPLES’ ADWA: The Imperative of Embracing Plural Interpretation 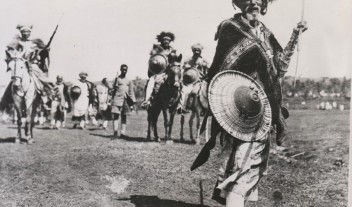 Every year, when March is around the corner, Ethiopian social media activists start to be noisy. The defenders of Adwa as a phenomenal black history moment and the revisionists battle it out, often in a vulgar mode of exchange. Over the last two years, I have been observing this discussion between those who seek to promote the old narrative of state orthodoxy as the only and the universal meaning of Adwa and those who take a more sceptical stance seeking to show the darker sides that the Adwa moment signifies. The following paragraphs were written in response to those who seek to impose on the Oromo this exhausted old narrative of the ideologically motivated imperial State Orthodoxy.
1. There are right reasons to celebrate the battle of Adwa. But to say Adwa is a black man’s war fought for securing the freedom of the people of the black race is celebrating the event for the wrong reason.

Source: THE PEOPLES’ ADWA: The Imperative of Embracing Plural Interpretation

Posted on May 29, 2016, in Uncategorized. Bookmark the permalink. Leave a comment.

← Jimma University hosts the First International Conference on Oromo Studies
Menelik II is the Least of my Worries: A Note to the Apologists of Empire →