← The Irreechaa celebration: an expression of joy for the lives we live, as it is a time for mourning for the lives that were lost
I am afraid: they have planted a seed that bears a fruit which keeps poisoning the unity of Oromos → 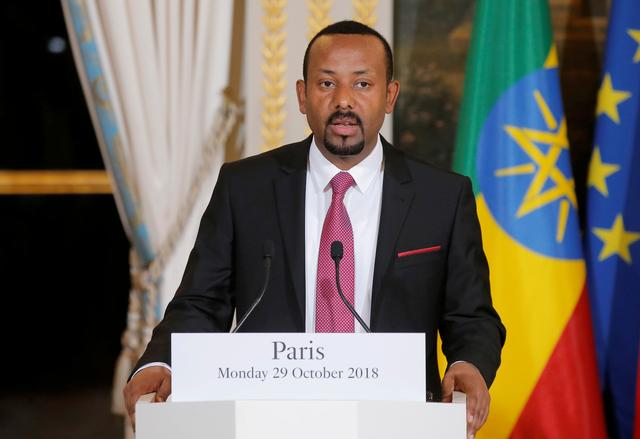 The arrests appeared to mark a crucial moment for Abiy, who has embarked on a whirlwind series of economic, political and diplomatic reforms since he came to power in April.

Attorney General Berhanu Tsegaye said evidence showed “the senior leadership of the national security agency” told members of Abiy’s Oromo ethnic group to attack him at a rally in June.

The assertion is jolting in an ethnically diverse country that has seen recent ethnic clashes and because Abiy is the ruling coalition’s first Oromo leader.

Berhanu said at a news conference that arrest warrants have been issued for 36 security agents accused of abusing prisoners and for more than 30 officials from a military-run firm, where he said inquiries had uncovered mismanagement.

Reuters could not immediately contact the National Intelligence and Security Service (NISS), or the industrial conglomerate named by the attorney general – Metals and Engineering Corporation (METEC).

Several hours later, 36 officials from branches of the security forces including NISS and the federal and Addis Ababa police forces and 26 officials from METEC appeared in the Federal High Court in the capital.

The court session ran until 9 p.m., a rarity in Ethiopia, and a judge denied the suspects bail and gave police 14 days further to investigate. None were charged.

Among those in court was METEC deputy director general Tena Kurunde and the wife of former deputy head of NISS Yared Zerihun, witnesses said. Yared was moved from that role to head the federal police in April but resigned three months later.

Ethiopia’s security services have for decades wielded power as has METEC, a key player in an economy dominated by the state and the military.

Abiy’s reforms have challenged the security services and upended policies and hierarchies that have been in place since his ruling EPRDF coalition came to power in 1991.

He has pledged to open state-held sectors to investors and acknowledged police brutality he likened to state terrorism. He has also made peace with neighboring Eritrea and announced pardons for previously outlawed Oromo rebels and other groups.

A grenade attack killed two people at a rally in Addis Ababa in June, soon after Abiy left the stage. Authorities arrested five people in September, saying they were members of the formerly exiled Oromo Liberation Front that Abiy had pardoned.

“The evidence we gathered shows that the senior leadership of the national security agency instructed Oromos to carry out the attack because it would mean that the prime minister – an Oromo – was killed by Oromos,” the attorney general told a press conference. “It would (also) give the impression that he is not endorsed by the Oromo population.”

Berhanu said several suspects had fled Ethiopia or were in hiding and investigations over the past five months had uncovered serious abuses by security services.

“There are people that have been blinded after being held in darkness for long periods of time. Others have been left infertile because of blows to genitals. There are some that had limbs broken. Women have been subjected to gang rape, and men to sodomization,” Berhanu told reporters.

He said investigations had also uncovered issues with procurement procedures at METEC.

He said the investigation had examined METEC’s contract for the Grand Renaissance Dam, the centerpiece of Ethiopia’s bid to become Africa’s biggest power exporter.

In August, the government canceled the contract, citing delays in completing the project.

Until recently, Ethiopia’s government was dominated by members of the Tigrayan minority. Ethiopia has seen economic growth near 10 percent over the past decade but rights groups say the government has cracked down on dissent.

Posted on November 13, 2018, in Uncategorized. Bookmark the permalink. Leave a comment.

← The Irreechaa celebration: an expression of joy for the lives we live, as it is a time for mourning for the lives that were lost
I am afraid: they have planted a seed that bears a fruit which keeps poisoning the unity of Oromos →