(Advocacy4Oromia, 11 September 2015) Minnesota Oromos get their very own street under their community’s name-Oromo Street, today, 11 of September 2015. 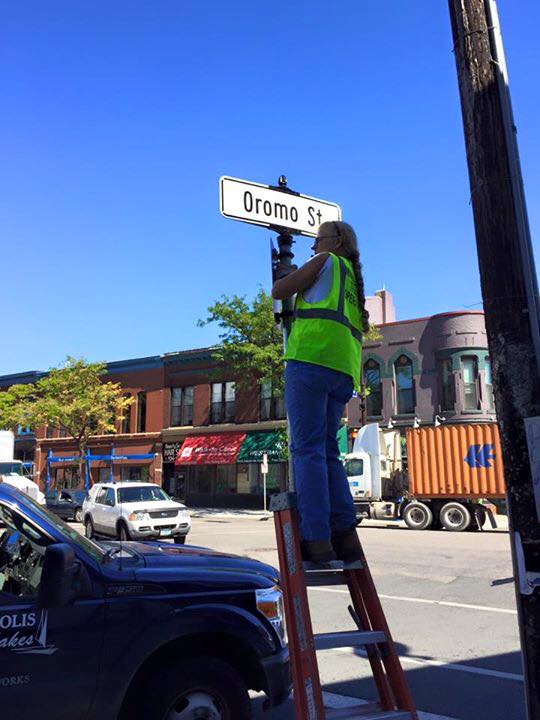 According to our information, the Little Oromia’s ‘Oromo Street’ will be officially inaugurated on September 12, 2015.

Minnesota of United States of America is widely known as “Little Oromia” among Oromos with an estimated 40,000 Oromos who flee from their homeland,Oromia, East Africa, due to political persecution.

The Oromo are the single largest ethnic group in Ethiopia, constituting nearly half of the country’s 94 million population. 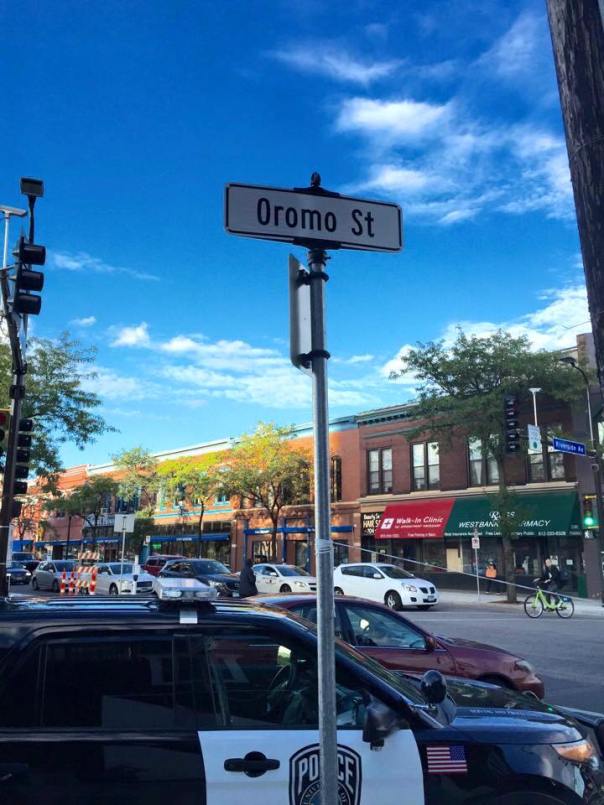 “To the Oromo who has for so long remained invisible in its adopted home after home, a well-deserved recognition, and a breath of warm air in the thick of Minnesota’s bitter winter,” said Hassan Hussein, the executive director of the Oromo Community of Minnesota. (http://www.opride.com/oromsis/news/3784-minneapolis-may-soon-get-a-commemorative-oromo-street)

“Minnesota Oromos get their very own street under their community’s name today! How Awesome!,” said Demitu Argo on her Facebook timeline.

“It is official that the most anticipated commemoration of ‪#‎Oromo‬ and ‪#‎Somali‬ street is happening this coming Saturday. Cheers to all my East African immigrants! In celebration, the WestBank communities are hosting 1st Annual Block party. Here is the program breakdowns on Saturday 12, 2015. Can’t wait to park on Oromo street!,” said Edao Dawano on his Facebook timeline.

“Oromo Street is in effect in Minneapolis, Minnesota. Can’t wait to visit. Thank you America for recognizing the people you saved for the brutal Ethiopian government,” said Birhanie Beka Geleto on her Facebook with a feeling hopeful, from Washington, DC, United States ·

“Minneapolis to officially designate Oromo street in a ceremony on Saturday,” said OPride.com on its Facebook.

“#‎OromoStreet‬ was erected in Minneapolis Minnesota today. A real symbol of passionate advocacy & a telling sign of the undeniable audacious heart & spirit of its people (Photo Credit: @edawano),” said Urgé Dinegde in Minneapolis, Minnesota on her Facebook.

“”Fact is the so called “Ethiopia state” is a state of myth without the historical socioeconomic contribution of the great Oromo nation. Renaming street is one step towards the greatness of the Oromo nation. For the question, where he got that from, long live the Oromo nationalist that lived and paid the ultimate price so that our name Oromo shall shine,” said Abdi Fite in January 13 on his Facebook.

An interesting comment also come from Abdii Gemechu  in a very proactive way. He hopes to hear the following voice on GPS in Minneapolis, “In One Thousand Feet, Turn Right on ‘Oromo St’ and your destination is on the Right!”

This street name was proposed by Abdi Warsame who was born in Somalia and grew up in the United Kingdom of Great Britain where he studied and obtained a B.Sc. in Business and a Masters Degree in International Business.

Additional background information can be get from http://www.opride.com/oromsis/news/3784-minneapolis-may-soon-get-a-commemorative-oromo-street.